I’ve made CTM a few times using a variety of recipes, and it’s never quite right- right being by my standard of this fabulous Indian restaurant in Cincinnati on the UC campus. It was amoung the most delicious things I’ve ever eaten, and since then I’ve been on a fervent search to re-create (or re-find at some local eatery) the equivalent! Despite claims by my Indian friends that it lacks some authenticity, Clay Pit is the yummiest replacement I’ve yet to find. This recipe, though, was certainly closer than my previous attempts.

The boyfriend’s best friend- let’s call him Ogir from here on in- was recently telling me of how he and his girlfriend made CTM last week. Naturally, after hearing him casually (he says most things casually, this was no exception) say that it was rather enjoyable, I asked for the recipe. This was a fun one!

Over came H bearing two packages of whole wheat naan, bless her, and so we began. I’m usually prepared with the mise en place, but was a bit scrambled today, as I had just literally seconds before arrived home from an after-work info-session-thing at which I was presenting and thus didn’t have my thoughts all arranged. Poor H had to constantly be bopping about the kitchen asking where I had placed the bag of sugar or the can opener. Note to self, in future, lay out all ingredients- or at least the non-refrigerated ones- beforehand.

The recipe we used is from the PBS Test Kitchens, and can be found here if you sign up for a free 14-day trial of the website (do remember to deactive your trial should you not wish to continue their service after cooking this one!). Note that you’ll need a wire rack (like those used for cooling cakes/cookies, or for grilling), a cookie/baking sheet, and tongs (metal or something that won’t melt, as your chicken will be coming out of a 525 degree oven!) in addition to the usual accoutrements.

We followed the recipe as written, except for the following changes: no onion, cayenne, or serrano (we didn’t have them handy and aren’t crazy about spice, though H is more tolerant of it than I); a bit extra on the coriander, cumin, and ginger; the yogurt we used was yoplait pro-health vanilla low-fat yogurt: and it had a very thick consistency, so really, no need to go using whole-fat milk yogurt if you can find a thick low-fat one!; olive oil in place of ghee- H and I both lean towards mediterranean cuisine and thus are great advocates of EVOO; no cilantro; cooked the chicken for about 12 minutes per side to make sure it was well cooked; added two extra cloves to garlic to each of the sauces.

Out came the most buttery and smooth chicken I’ve ever cooked, and a very yummy, spiced- but not spicy- tikka masala sauce. Mmmh! And the rice- a combination of jasmine and basmati (first toasted in olive oil, salt, and pepper, then boiled in low-sodium chicken stock) which I thought I had botched, came out as a textured yet delicate mix (the jasmine mushed a bit but the basmati remained a bit crispy… it was an interesting duo between the two of them).

It’s a recipe that H and I agreed we would both make again in the future, perhaps adding some cayenne and onion on the next try. Try it out and see what changes you make- it’s fairly alterable! :) 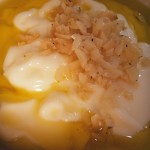 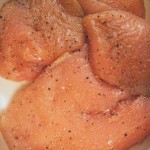 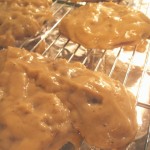 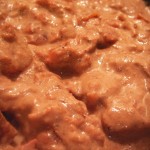 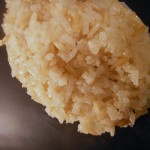 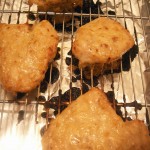 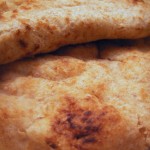 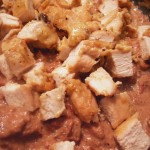 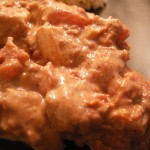 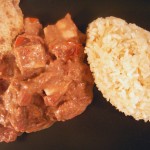 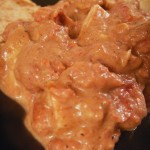 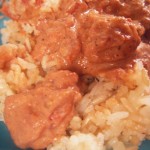