I really wanted to make brownies for this week because SXSW is in full swing, which means that portable chocolate snacks are a must (my most trusted form of headache medicine). I was going to make a sheet brownie and then cut it into pieces, but the boyfriend still has our square pyrex (my sister had made him a brownie cake for his birthday and we have yet to recover its pyrex)… thus I decided to try out brownie cupcakes (Chrissie makes some very yummy ones), and naturally decided to experiment a bit. My dinner guest is allergic to nuts, so I went with half tranditional, half not.

Vanilla extract went into the entirety of the batter, but in the latter half I added a cup of chopped cashews and three tablespoons of pralinutta. I made this batter be particularly fudgy by adding veeeery little water- the recipe I use calls for 1/2 cup, and I added closer to 3/4 tablespoon… I lined a muffin pan with cupcake papers and simply put the batter in- no need to butter first! I also made these with olive oil in stead of any butter. They’re yummy, and the nut ones are intensely nutty, but the flavour isn’t overbearing in the least. They’re my favourite iteration of brownies yet, very moist! To ensure that moistness and fudgy quality, be sure to undercook the brownies to JUST the point where they no longer are liquid/jiggly inside. Then after a short cooling period on a rack or stovetop, move to the fridge to cool for several hours.

They’re portable, simple… great as snacks or gifts. Try it out and make some friends happy- they’re delicious and, with the nuts and olive oil, more nutritious than the average brownie! 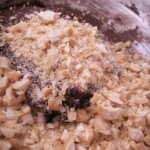 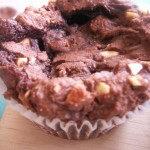 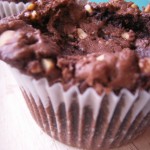 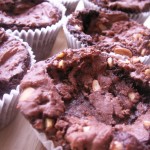 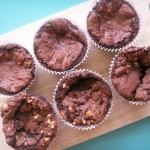 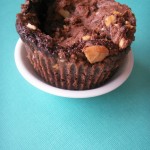 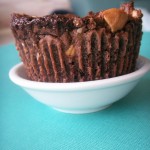 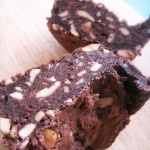 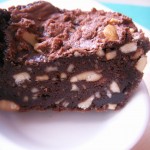