I think the most amusing part of this one is that the recipe I started with is labeled “Eggplant Dumplings in Cherry Tomato Sauce” in my Antipasti recipebook. Sadly, this recipe didn’t quite completely work out- hence it being labeled in the accident category. But it was an educational experience, and one I was able to turn around… mostly… in the end.

My mistakes began with the eggplant filling. I made far too many changes here, wanting to be adventurous. Here’s what went into the filling:

I took the lot, covered the pot, and let it simmer on medium heat for quite some time (perhaps about 20 minutes?) until the zucchini was fairly creamy. I then transferred the mixture to a bowl and put it in the freezer for about 20 minutes- then the fridge for another 15- then out on the counter for another 5 (it picked up a number of frequent flyer miles what with all this travelling). Meanwhile, I chopped about 1.5 cups of carrots, a handful of cherry tomatoes, added a little dark brown sugar, closed the pot again (after having scrubbed it thoroughly, o’course) and let it simmer. Unfortunately, I decided it was safe to sit with the boyfriend and sister to eat the strudels at this point… and thus the mixture had burned and caramelized to tar (I have issues with tar! Just like the failed tarte tatin…) and I had to throw the thing out. This meant no carrot-tomato sauce to put the bundles in- which, in the end, was for the best, as my crepes were too thick to bundle!

To make the crepes, I followed the suggestions in the book, but halved the recipe: Mix a cup of milk (I used skim), 3/4 of a cup of AP flour, and an egg. Whisk, then let sit for 15 minutes. Then lightly coat a sautee pan with olive oil, ladle a bit of the batter on, and cook each side for about 3 minutes or until browned until you’re happy. For a more tortilla-looking crepe, add more oil- for a more burnt crepe, keep the pan as dry as possible.

Unfortunately, the zucchini puree turned out not yummy at all. It’s not unpalatable, but the boyfriend and I agreed the taste was off. Why do you think this was? Does anyone know? Which ingredient do you think is the main culprit? Is zucchini just not meant to be pureed?

Clearly there was only one thing to do here: take picture with the puree, then take it out and replace it with a far better alternative. Out came the jar of pralinutta (yes, I know, it’s not nutella- I was curious to try the domestic alternative, and it’s quite nice)- just spread it on, roll up your crepe, and yum! Much better- though no longer an appetizer and now a dessert, at least it was partially saved.

…By the way, if anyone wants the puree, it’s sitting in the fridge, waiting for someone to show it some love (and that shan’t be me!) And if someone has suggestions on how to better make that puree in the future, I’m all ears! 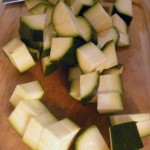 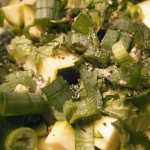 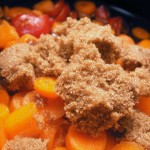 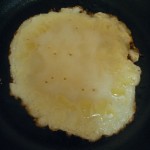 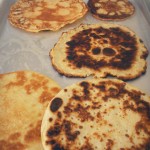 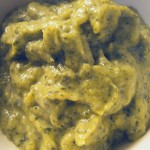 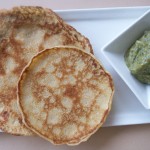 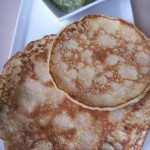 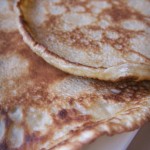 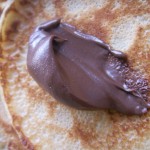 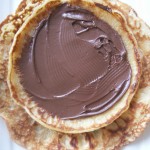 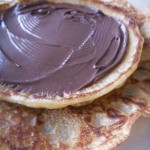