I’ve learned one rather important lesson with this cake: brownies are heavy, heavy things, and don’t have the aerodynamic properties of light, spongey cakes.

For my birthday, I opted to do a great deal of baking to lure in celebratory folk. I work in a company where the men greatly outnumber the women and the cake-lovers comprise a minimum 90% of the employees- so clearly, making a cake would bring the masses to my office and we would have a happy birthday time together. That said, as soon as I sent out my bait, far more fish than expected took hold- one cake would certainly not do the trick, so I decided on two, and opted to have them be very different, so as to please everyone.

This was the first, then, of the two (office) birthday cakes (not counting the one for the home celebration. as can be seen, I take birthdays qutie seriously when it comes to entertaining others by way of cake). My friend B had recently been qutie generous and had gifted me a large amount of kitchen gadgetry, amoung them a large and lovely bundt pan. And thus I decided to yet again ignore the norm and make a brownie bundt, never, of course, stopping to wonder why it’s not usually done.

I found that the reason is simple: to make a proper fudge brownie, one can not expect to do so in a cake mold. It WILL fall- and it did, but luckily, not on the outsides! Ironically, the bundt pan was part of a fillable cake mold of which I decided to only use the bundt base and not insert a cavity for filling. The baking process was very long, as I had to be certain the outside shape of the cake would hold (even if the inside did not). The result (unfortunately I was unable to get a good picture of a slice prior to my coworkers demolishing it) was a well-shaped exterior, a bit difficult to cut through, with a very fudgy inside that had stuck to the edges, thus creating a hole.

Despite this, the cake had a wonderfully rich flavour, as I had added pralinutta to the brownie dough to make it more rich and flavoured with hazelnut. Melted pralinutta was glazed over the top of the cake, with honey-toasted pecans (the best part of the dish, honestly) were encrusted in the spread. 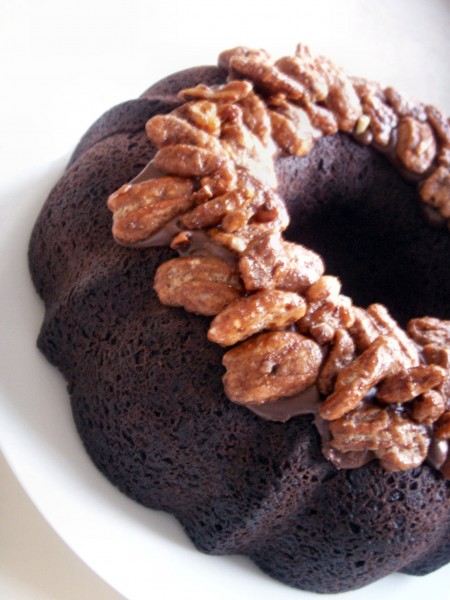 I’m not sharing the recipe as this one may have a commercial future… but I can share that it was eaten quickly and happily. I took an exit poll of those leaving my office to ask which cake they had liked best, and it was exactly half and half, so I’ve deemed both worth making again. All I can say is mmh! :)

However, I’ve decided to disclose a simplified version of the cake!

Et voila! You are finished! It’s rather simple when you look at what goes into it… but the taste is intricate, flavourful, and downright yummy. 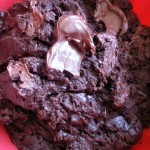 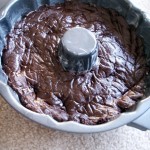 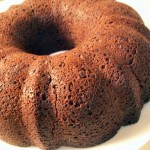 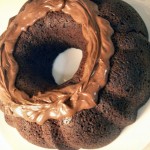 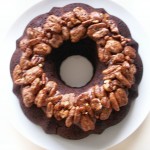 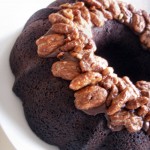 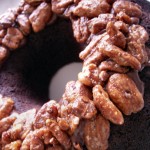 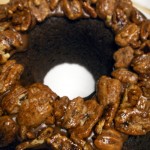 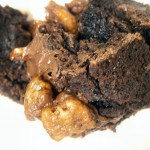 One thought on “Hazelnut Fudge Brownie Bundt with Honey-Toasted Pecans”