I fear the titles for these may be becoming increasingly long, but this happened to be a rather complicated cake, so I’ll consider it apt. :) For Office Birthday Cake #2, I had wanted to make something incredibly different for the non-chocolate folk as well as for those who didn’t want so rich a cake (my brownie cakes tend to be incredibly rich and fudgy, which I will admit is not for everyone) and thus thought that a vanilla-based cake would be a smart bet. However, leaving it at that would be boring, and I had been wanting to experiment with pineapple… thus this came about. It was absolutely a hit, and devoured as proudly as the other cake in the office. The boyfriend really enjoyed this one and has requested an encore performance, so I’ll make it again some time, perhaps with some slight variations (as I seem to be incapable of making exactly the same thing twice). 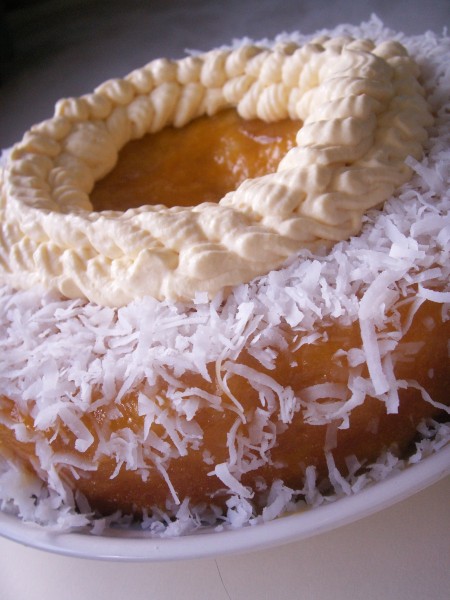 So, again, I shan’t give the exact recipe, but I will tell its contents. The vanilla cake has pineapple tidbits (very small pieces) and chunks (larger pieces). Any moisture used in the cake batter was substituted in favour of pineapple juice. I added 1 cup of fresh shredded coconut to the batter as well. I placed four pineapple rounds in the bottom of a springform pan, upside-down-cake-style, with some brown sugar for browning, then poured in the batter. Once baked, I flipped over the cake and allowed it to cool on a rack while I prepared the glaze. The mango glaze is simply blended mango pulp (Ataulfo) and 1 tablespoon of powdered sugar. Mango is a very thick fruit, so it barely needs any help. You could add a bit of ptoato starch if your mango glaze seems runny. I spread this over fairly thinly onto the cake, then stuck the coconut on while it was still very sticky. The cake was then chilled overnight to ensure the mango would fuse into the cake. The mango whipped cream follows the same process as the blackberry whipped cream, but with mango in the berry’s stead. I piped this (shell-shape) onto the top in circles, but you could decorate in whatever fashion you wish!

Here’s a simplified version of the ingredients:

It was delicious, incredibly moist, and very good. I’m usually against pineapple, but I liked the cake and was not bothered by the pineapple texture (my usual qualm). It fell apart as you ate it, and the coconut added a very nice sweetness that went splendidly with the vanilla, giving the cake a decidedly island attitude. 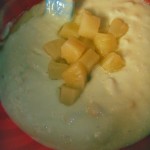 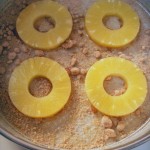 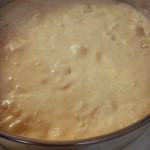 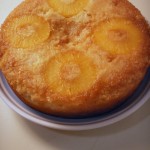 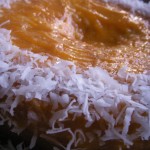 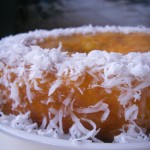 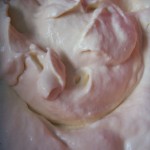 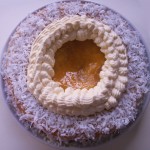 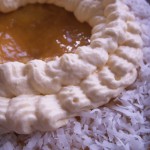 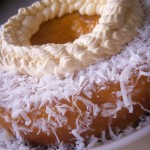 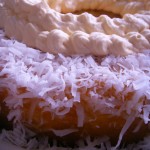 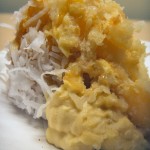